Bangladesh’s coastline is dotted with diverse beaches, coral reefs, dunes and wetlands. These diverse ecosystems are critical natural buffers to climate change impacts – but they are also under threat due to rising sea levels.

The country is one of the world’s most vulnerable to climate change, and Bangladesh is experiencing an uptick in extreme weather events like cyclones, flooding, erosion and saltwater intrusion. These climate-related changes, especially along the coast, put intense strain on ecosystems already under pressure.

The coastal region covers 30% of the country’s cultivable land, making agriculture vulnerable to these weather extremes. With limited options to mitigate these impacts, those making a living from the land must urgently adapt – and that’s what the Integrated Agriculture and Productivity Project (IAPP) set out to do.

In rural areas, most farmers in Bangladesh cultivate one rice crop per year in tidal surge and flash-flood-prone areas. In some areas, rice can be grown twice a year, but these areas are also prone to drought or saline intrusion due to sea-level rise. The GAFSP-funded project, in collaboration with the Food and Agriculture Organization of the United Nations (FAO), works alongside the government of Bangladesh to support smallholder farmers in boosting their crop, livestock, and fisheries yields. 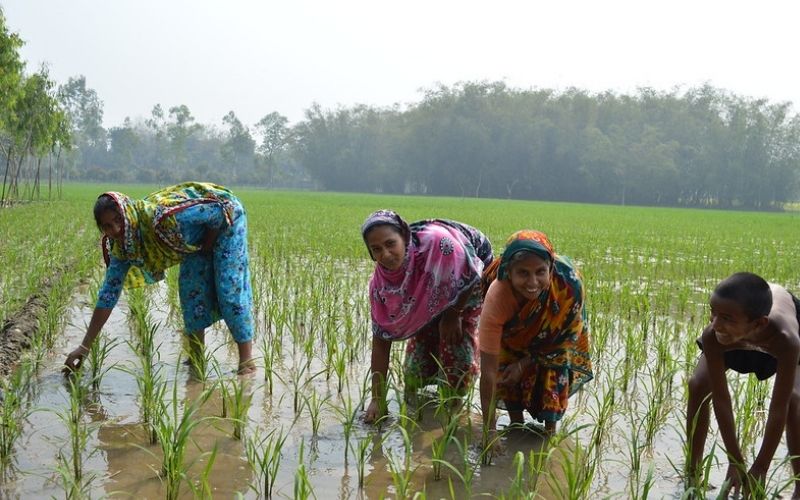 At the Bangladesh Agricultural Development Cooperation (BADC) under the Ministry of Agriculture, Dr. Mizanur Rahman, explained: “There were two main concerns for farmers: the price they could get for their crop, and the availability of quality seed. We decided to work with farmer groups, through demonstrations and adoption programs, to support them in accessing new, high-quality seed that could help them adapt to weather extremes.”

“At first, farmers wanted new seeds, like newly developed varieties of saline-tolerant rice, for free, as they were not sure of the market,” explained Dr. Rahman. “Then, when they benefitted, they were convinced to continue and invested their own money in that technology.” Through government negotiations, a set price was assured to producers before the growing season, and farmers were trained in better management practices to maximize yields and connected with traders to buy their product.

We aimed to open a new window of technology for farmers, but we wanted to adopt a bottom-up approach

Imanun Nabi Khan, project leader and producer organization specialist at FAO, said: “We aimed to open a new window of technology for farmers, but we wanted to adopt a bottom-up approach. So we supported Livelihood Field Schools (LFS) and seed villages mobilized by the Department of Agricultural Extension (DAE), where new seeds were demonstrated and produced for farmers, managed by farmers themselves.”

As part of this new approach, a ‘demonstration farmer’ in a group cultivates a promoted variety on a demonstration plot. This farmer is given all necessary inputs like seeds or fertilizer to grow the crop, along with training on improved production techniques, explained Imanun, and then the rest of the group is trained in growing the new seed. In the second year, the ‘adoption year,’ the rest of the group is trained. These ‘adoption farmers’ are given seeds but must purchase other inputs themselves. Similar extension approaches were adopted for livestock and fisheries.

The project produced a multiplier effect – with farmers producing a far greater variety of crops, for better yields. In areas where rice was traditionally mono-cropped, crops such as mung bean, sunflower, and mustard were introduced to grow alongside new rice varieties, so that land usually barren at certain times of the year like before the winter crop, was productive while bringing in more income. In areas traditionally double-cropped; triple cropping was introduced with the same crops, boosting incomes and increasing yields.

By 2019, farmers growing improved rice varieties had 14% higher paddy yields than farmers in control villages. Lentil yields were more than two-thirds higher and mung yields were 28% higher, with the new intercropping techniques catching on in surrounding villages. Income levels increased by 15% for crop farmers and 37% for fisherfolk between 2014 and 2016, with close to 85% of crop farmers and 98% of fish farmers reporting that their family food consumption improved.

Almost 1.5 million farmers, 20% among them women, benefitted from the new climate-resilient rice varieties and intercropping techniques